CSO Preston gave the report on behalf of the Police. There had been a reduction in crime in our area over the last month. There were 2 incidents of anti-social behaviour, and 3 of theft. All dealt with appropriately.

There was concern that bike thefts in general were on the increase and PCSO Alex Aldous will be organising a bike marking event possible in ALDI as before.

PCSO Alex had also been successful in obtaining £200 of funding for Tan LAN’s youngsters and had organised 3 very successful events at the Watersport Centre, Porth Eirias, and each event being fully booked. She is now looking to fund a Halloween party there as well.

There has been a spate of cold calling in the village. A vehicle has been reported with Irish number plates, if they continue to pester people then the police need to be advised.

Monty had apologised for the mistake of forgetting to hand the key to the Chair for the last open meeting, just proved he as human as the rest of us.

Colwyn Bay Conservation & Environment Federation are working with the County Council and other groups to put together a Heritage Lottery Bid to help regenerate Eirias Park. There will be a display of the proposals in Station Road, on 30th September 10am to 4pm as part of the community consultation. Anyone with any thoughts on this is asked to visit and give their suggestions.

The Diana Awards are looking for nominations for young role models aged 9 to 18yrs who are selflessly transforming the lives of others. If you want the Association to nominate then please advise the Secretary.

Lianne gave us an update so far. Although there have been no prosecutions the project is working as there are significant reductions in dog fouling in the areas targeted so far. This reduction seems to be continuing even though the cameras have moved on.

We were shown one picture of a dog seen in Wynn Gardens, unfortunately no one could identify the animal. The picture will go on the website. 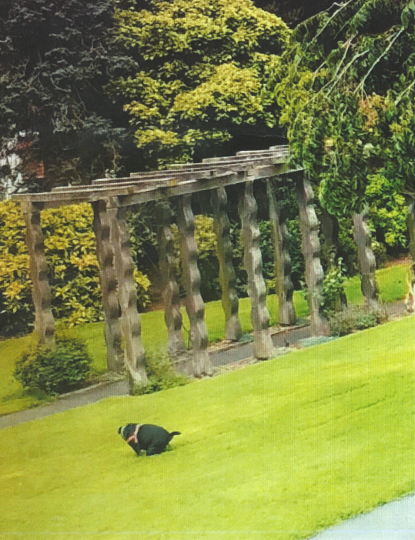 The Secretary, and other volunteers had leafletted a large area of Old Colwyn. The leaflets should go out in the vicinity of the cameras to begin with but it didn’t matter that these had gone out where they hadn’t been yet, it just saved the job in the future.

The cameras would be installed this week in Min y Don Park and at the foot bridge at the bottom of Tan y Lan Road. They will also be placed at the rear of Poyntons again.

The meeting was pleased the prom road was now open and can’t wait for the rest of the work to be completed so the walkway and the toilets will be available to all. There is to be a replacement kiosk built but this is a different contract.

It is expected that the Welsh Government minister will give his approval to the dismantling of the pier in the middle of next month, October. The tender documents have been published to get a contractor to do the work as soon as possible. Designs are in progress to build the new shortened pier structure.

The fan vent at Porth Eirias is still angled towards the play area. The Councillors are on the case.

The painting of the railings was appreciated and did enhance the look of the village. Plans are close to being finalised for the upgrade of Cefn Road. As soon as these are available they will come to a meeting of this Association.

There was a query as to where they were with the new ‘Old Colwyn’ signs. No one was able to answer.

No further information at this time.

The new Cabinet Member for ERF has put a pause and review on the introduction of charges both in car parks and the promenade.

The Secretary had sight of an email that said the faculty would probably be approved for the installation of the electricity for the bell. The ringing of it would be a matter for the Area Bishop and the Vicar to discuss with the residents.

Other than the grounds are being looked after there was nothing further to report.

(a) Land on Llysfaen Road

Land on Llysfaen Road was still in a state and hadn’t been cut or attended to for the last year. The Councillors will contact the owner again and ask that the land be tidied.

Has been tidied and cut back but will not be resurfaced as the current surface is deemed acceptable.

This is in need of cutting back, will be reported for action.

There was a manhole outside Poyntons that isn’t seated properly and therefore made a noise every time a vehicle, especially a large one went over it, will be reported for action.

The scaffolding on Station Road that had been there for some time, to the annoyance of some, is now being used and the roof repairs taking place.

A question was asked as to the current status of this road as more and more motorists are parking on it. The Councillors were able to say that this road was shortly to be part of a consultation from the County Council as to whether it should be reopened to traffic or not, so hopefully this will either mean it will be open or that enforcement action will follow.

Next meeting is on October 11th